It’s tick season which means you need to be even more diligent about checking your pets daily for ticks. No one wants their fur baby to be struck with the dreaded Lyme disease.

Lyme disease (borreliosis) is an infectious, tick-borne disease first recognized in dogs in 1985. It is caused by a type of bacteria called a spirochete, Borrelia burgdorferi. The Western black-legged tick, Ixodes pacificus, is the primary carrier of the B. burgdorferi bacteria in the western United States. Although Lyme Disease is uncommon in Washington State, it is most common in the Western half of the state. 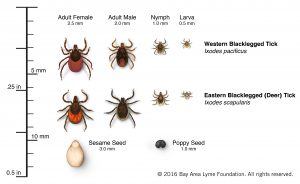 For a tick nymph to transmit the bacteria, it must be attached to the host for about 48 hours. If the tick dies or is removed before 48 hours, transmission will not occur. Even if a tick is a carrier of B. burgdorferi and it attaches to a dog for more than 48 hours, the dog still may not contract the disease. Only around 10% of dogs that are exposed to B. burgdorferi will contract the disease. There is no evidence to suggest that infected dogs pose a risk to other members of the household except as a reservoir of infected ticks. Once a tick has had a full meal, it will detach and not bite another mammal. The risk comes from ticks that have not gotten a complete meal and are detached.

Although Lyme disease affects many more dogs and people in the eastern coastal United States than in Washington State, being aware of how the disease spreads and how to prevent it could protect you and your pet.

In humans, only zero to three Lyme disease cases per year are reported to be infected in Washington. The first sign of disease is usually an expanding target-shaped or “bull’s-eye”circular rash that starts at the site of the tick bite. Fever, headache, muscle aches, and joint pain may also occur.

Symptoms of Lyme disease in dogs differ from those in people, and usually occur much later after the tick bite. Illness in dogs usually occurs 2 to 5 months after a bite from an infected tick. Dogs show several different forms of the disease, but by far, the most common symptoms are a fever of between 103 and 105°, lameness, swelling in the joints, swollen lymph nodes, lethargy, and loss of appetite. They do not get the circular rash that humans do.

Prevention of Lyme disease in dogs involves the use of vaccination and controlling exposure to ticks.

Avoiding exposure to ticks is the most effective way to prevent Lyme disease. Ticks live in forested or brushy areas of western Washington. They like to hang out in long grass and on the ends of low-hanging branches, where they can casually drop onto animals and people passing through the brush. Some types of ticks perch on the edge of low-lying vegetation and grab onto animals, and people, as they brush past. Other ticks are associated with rodents and their nests and may only come out at night to feed.

When working, camping, or walking in a tick habitat–wooded, brushy, or grassy places–wear long pants and a long-sleeved shirt. Tuck your pant legs into socks or boots and shirt into pants. Check your clothing and your pet’s coat regularly after spending time in these areas. Carefully inspect areas around the head, neck, ears, under arms, between legs, and back of knees. Look for what may appear like a new freckle or speck of dirt. Avoiding areas of high tick infestation during periods when ticks are active is one of the best ways to avoid contact.

Some flea control treatments like Frontline and Andvantix contain pesticides that will kill ticks within 12 hours of attachment.

Ticks carrying Lyme disease are very small and most people never see them. If you find a tick on your dog, do not panic. Check out How do I Safely Remove a Tick? Promptly remove the tick using fine-tipped tweezers. Grasp the tick as close to the skin surface as possible and pull upward with steady, even pressure. Avoid removing the tick with bare hands. Don’t twist or jerk the tick — this may cause the mouth parts to break off and remain in the skin. If this happens, remove the mouth parts with tweezers. After removing the tick, disinfect the bite site and wash your hands.

Most veterinarians have an in-house test that takes just a few minutes to run, during your exam, with a few drops of blood. This test tells you if your dog was bitten by a tick carrying one of the organisms. However, a positive on this test does not mean your pet has active disease. Most dogs who test positive have no symptoms. It does not tell you if your pet acquired actual disease from the tick.

Thankfully, Lyme disease is treatable. Dogs and people are treated with a tetracycline or penicillin-based antibiotic like oral doxycycline or amoxicillin for a minimum of 14 days, but 30 days is recommended. Some animals relapse once the antibiotic is discontinued and will need the antibiotic for much longer. Your veterinarian will want to monitor your pet’s kidney, heart, and nervous system function.

Although rare in Washington State, you can help you and your pet avoid exposure to Lyme disease by being alert and following up on any suspicious ticks, signs, or symptoms.